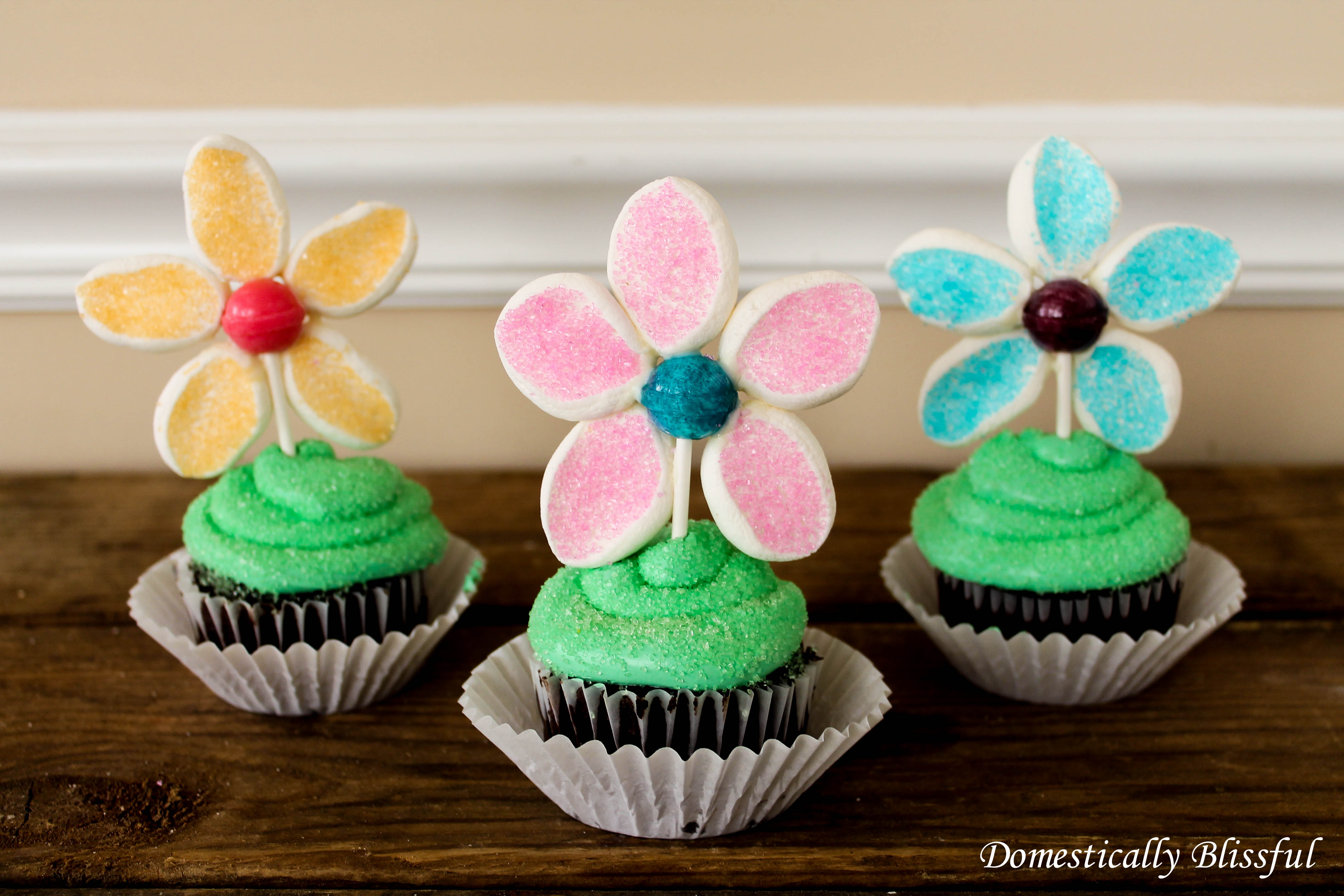 Yesterday, I promised something yummy for Easter. Now I know this Edible Flower Cupcake Topper doesn’t scream Easter, but I think they are perfect for an Easter/Spring party – the perfect little treat for kids before they go on a hunt for even more sweets!

When I told my husband my plan yesterday he laughed a little – while he was digging through the Dum-Dum suckers searching for his favorite ones – which is funny because I got the idea off of something I saw his mom make. He was a bit doubtful of my ability to get sprinkles to stick to marshmallows and then to stay on the lollipop – but the truth is, it was not that hard at all! Plus isn’t it adorable?

Chocolate Cupcakes (I used my favorite cake mix for the cupcakes)

Sprinkles – I had a container that came with green, pink, blue and orange that I bought from Walmart 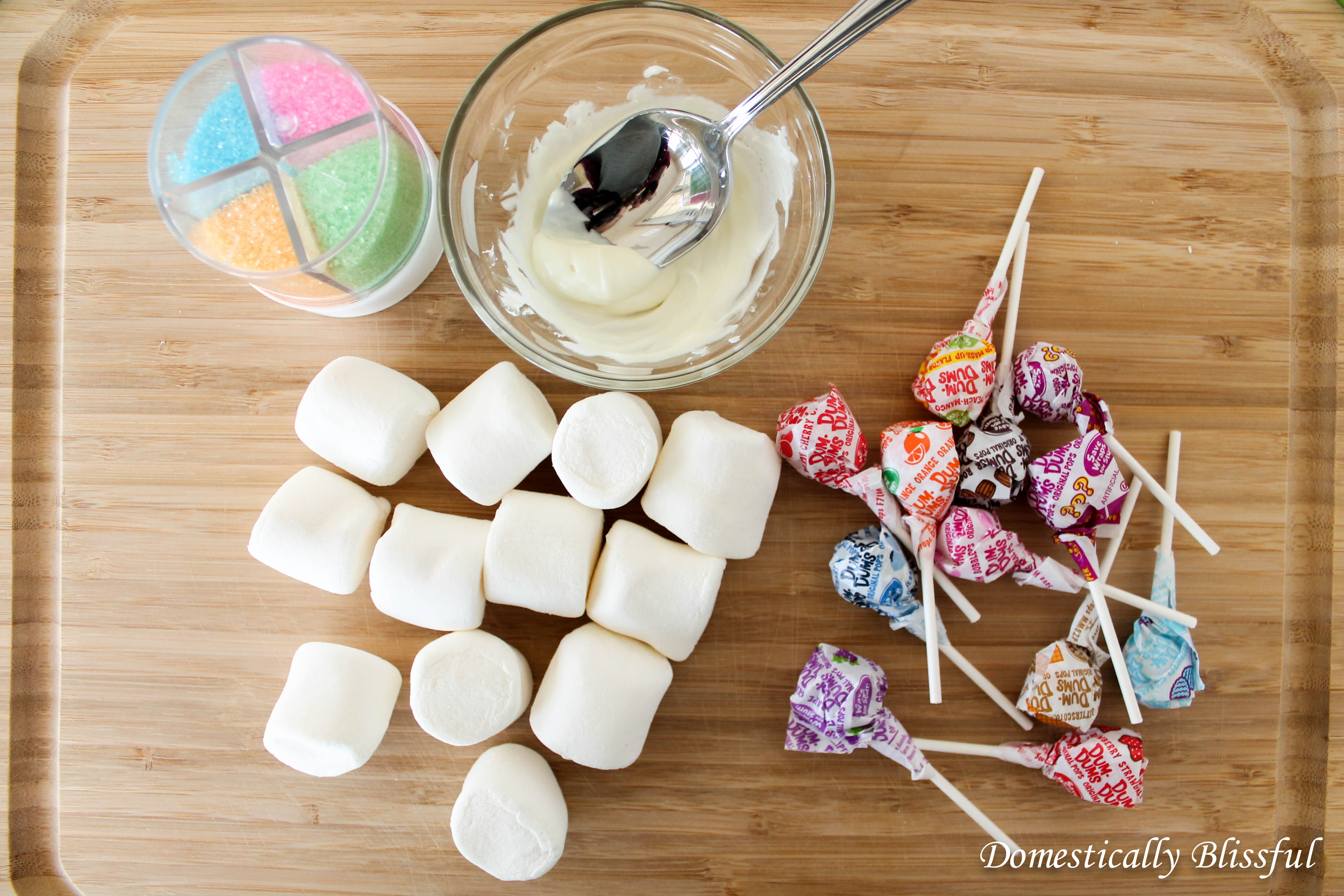 Continue to cut petals until you have enough for all of your flowers – I used 5 marshmallow petals for each Dum Dum. 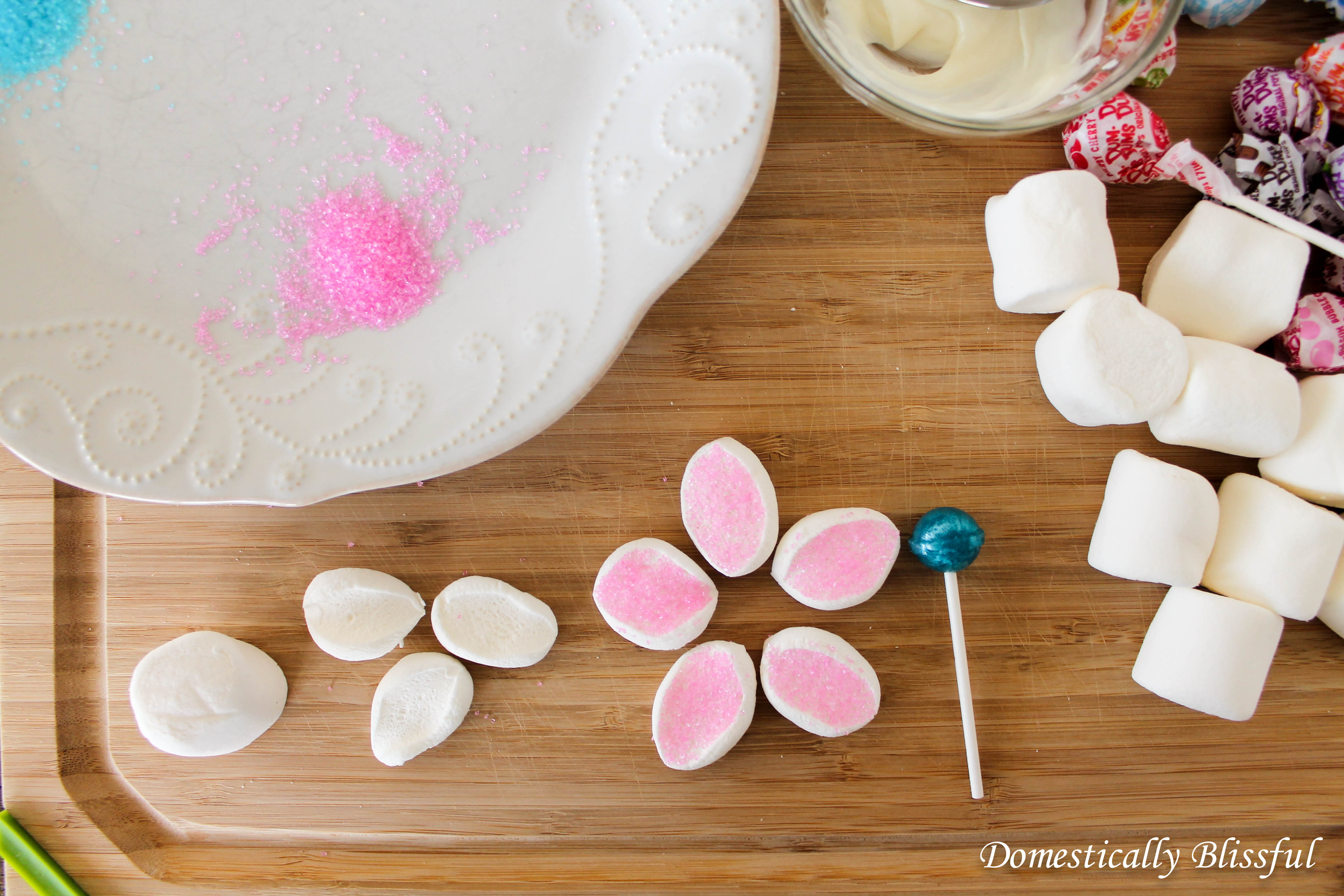 I only made a few of these Edible Flower Cupcake Toppers because it’s just Roger and I over here. So I poured my sprinkles on one large plate, pressed the sticky side of a marshmallow petal into the sprinkles then I flipped it over and coated the other side of the petal with sprinkles.

But if you are making these Edible Flower Cupcake Toppers for all of your cupcakes my sister told me that she puts her marshmallows in a bag with the sprinkles and shakes them up – which sounds pretty fun to me! I’m sure her four little ones help her with that part!

Continue to do this until you have formed all of your petals. 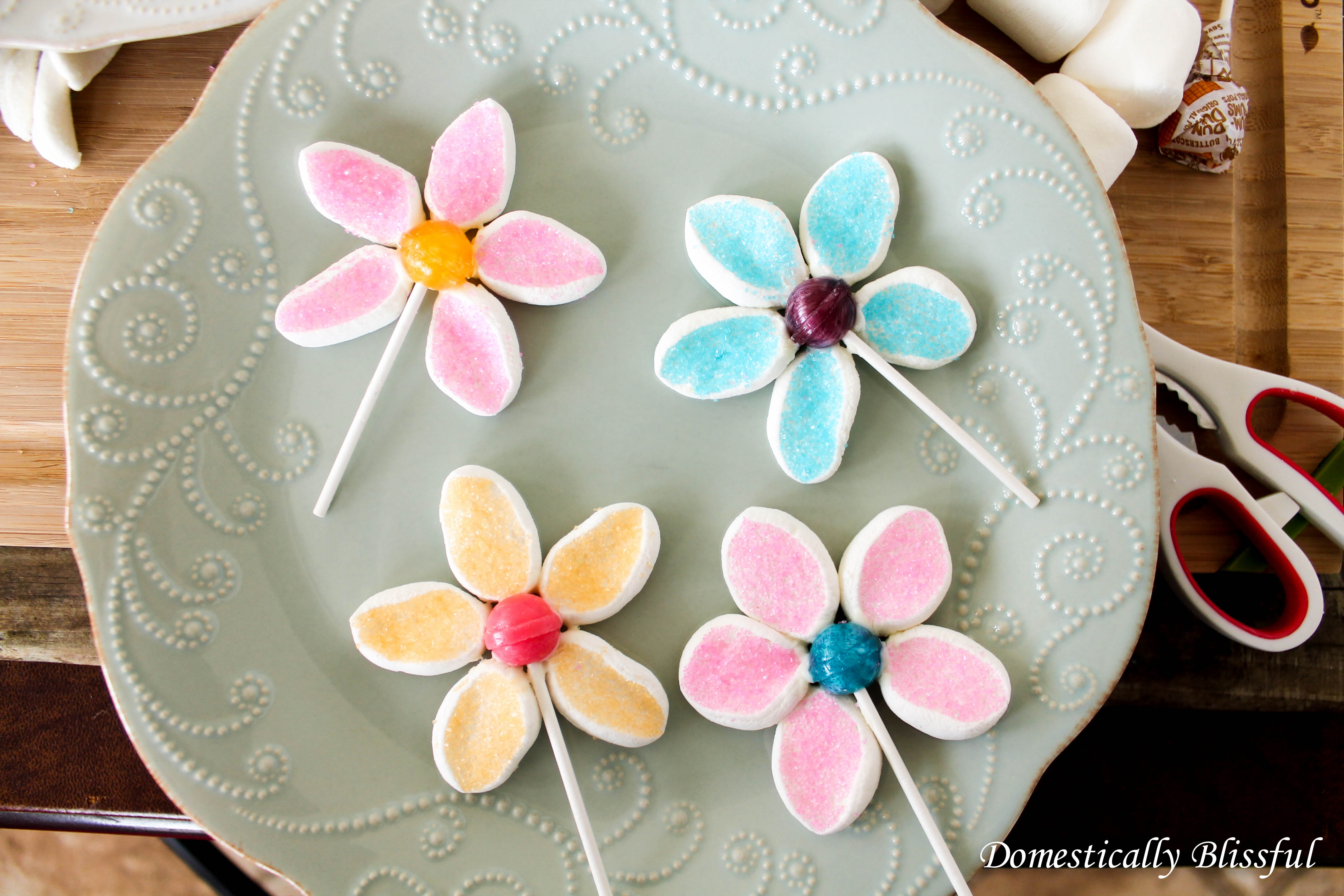 Once your petals are colored and arranged into groups of 5 with a Dum Dum assigned to each flower melt the white chocolate in a small bowl. You won’t need a lot of white chocolate just melt a little at a time and use as needed. If you melt too much at once you might have to reheat the chocolate partway through because it hardens rather quickly. I melted my white chocolate in a glass bowl for about 1 minute stirring it every 15 seconds.

Dip the end of each petal into the white chocolate and attach it to the lollipop. Continue to do this to all of the petals until all of your flowers are formed. Let dry before picking them up and putting them in your cupcake. 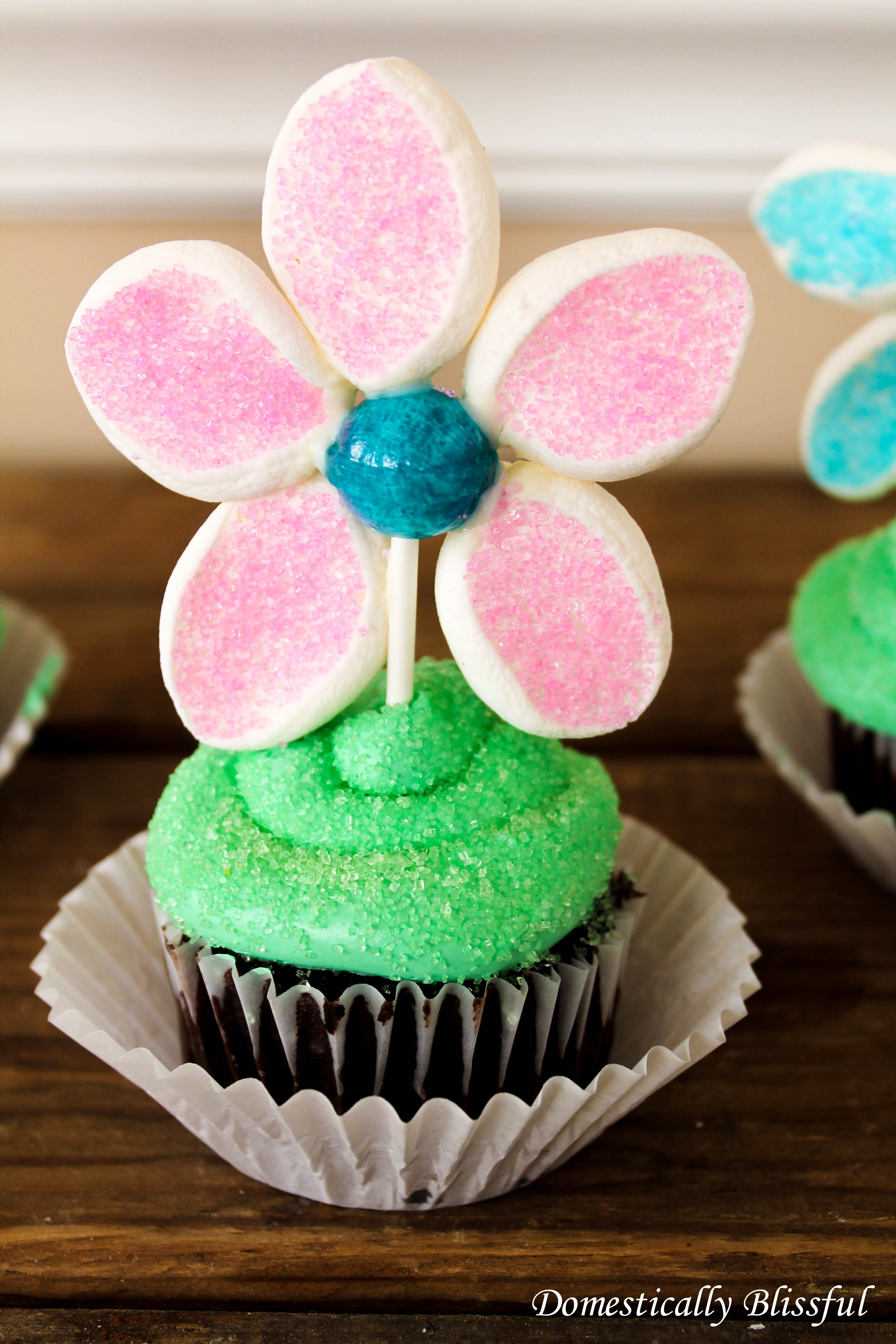 I whipped up some store-bought cream cheese frosting and added the green food coloring, piped it on by putting it in a plastic bag and cutting a whole in the corner, and then sprinkled it with green sprinkle sparkles. I just love sparkles!