An Extra Cheesy Macaroni and Cheese recipe for the mac & cheese lover in your life.

When I shared the process of Roger making his homemade macaroni and cheese on Thanksgiving I was totally unprepared for the response I received.

I thought I may get 1-2 DMs about the “cheese waterfall” video that showed the cheese sauce flowing down onto the pasta.

But what I received was message after message on Instagram asking for the recipe.

Some had already searched my website for it prior to messaging me while others asked for it for Christmas.

Although it took me some time to respond to all of the messages (you all really wanted his recipe!) I promised to have the recipe live on Domestically Blissful before Christmas.

Oh and before I go any further it’s important for me to note (per his request) that the original creator of this recipe is Roger.

And I don’t blame him for wanting the credit, his macaroni and cheese is so good!

The only problem is that Roger is one of those people that makes things up as he goes.

He is so proud that he never follows a recipe whenever he cooks. He says he’s just that good.

As a young adult I always thought it was cool to just cook on the fly without a recipe (here’s looking at you, kid) I’m definitely not that way anymore.

I love the tradition of passing recipes down from generation to generation and it makes me sad when recipes disappear with the life of their creative cooks!

Try as we might, without a recipe it just won’t be the same!

Luckily, Roger loves tradition and while he will continue to follow no recipe, he is totally open to sharing his own recipes.

So as the messages kept rolling in requesting his recipe, Roger and I sat down and he told me exactly what he put into his Extra Cheesy Macaroni and Cheese with an estimation of how much of each ingredient.

We then fine-tuned it and I got to work testing it out to make sure all of the ingredients were just right.

But we eventually decided that the perfect name to describe this homemade mac and cheese recipe is Extra Cheesy Macaroni and Cheese.

While we made it up a day ahead of time prior to Thanksgiving and topped it with breadcrumbs to be baked up on Thanksgiving, I wouldn’t really recommend that.

This Extra Cheesy Macaroni and Cheese is at its creamiest when it’s fresh.

And once you’ve tried a bite of this Mac and Cheese right from a hot steaming pot, you’ll never want to refrigerate it and bake it later.

However, if you do decide to make this recipe the day before, be sure to add an additional 1/2 cup of milk (when adding the milk to the recipe) so that it won’t get dry, but stay cheesy once baked.

And if you know your kitchen is going to be busy while making it fresh, I recommend prepping your ingredients well ahead of time and setting them aside in bowls (even the day before and keeping them in your fridge).

This makes creating it fresh the day of super easy and stress-free! 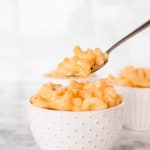 An Extra Cheesy Macaroni and Cheese recipe for the mac & cheese lover in your life.

I hope you enjoy your Extra Cheesy Macaroni and Cheese!

If you make this Extra Cheesy Macaroni and Cheese, be sure to share a picture and tag @DomesticallyBlissful on Instagram so that we can all see your delicious cheesy dish and so that I can share your image on my stories!

And if you enjoyed this recipe, be sure to subscribe to my newsletter below so that you don’t miss out on another blissful bite!

Then the angel said to her, “Do not be afraid, Mary, for you have found favor with God. And behold, you will conceive in your womb and bring forth a Son, and shall call His name Jesus. He will be great, and will be called the Son of the Highest; and the Lord God will give Him the throne of His father David. And He will reign over the house of Jacob forever, and of His kingdom there will be no end.”
Luke 1:30-33 NKJV