Ok. So remember how optimistic I was last month… silly me! Although the upside is that you are reading these words which means Domestically Blissful is still alive &  the mean Mean MEAN hackers. Seriously why be so mean? Especially to a blogger like me? What could I have possibly done to them? Oh well, I guess we will never know.

But before I get into what happened let me just say from the bottom of my heart how sorry I am for these problems & that I hope they didn’t cause you any problems or inconvenience you too much! I also want to thank all of you for being so incredibly supportive! I really appreciate all of the prayers & notes of encouragement I received through social media – you guys are seriously the best!

So here is what happened. PS if you don’t want to read this don’t worry my feelings won’t be hurt, you can just skip to the more interesting stuff below – but just make sure that your site is well protected! You don’t want to learn the hard way.

Remember how 2 weeks ago I only posted one thing, the DIY Pumpkin Wreath? The  reason for this is because I had a problem that was causing me to not be able to write, edit, tag, or basically do any type posting or blogging. In that post I mentioned that the reason was that I had some hacked javascript files. And somehow, even after fixing the problem, the hackers were able to get back into my site a few days later.

Unfortunately, we didn’t realize this until I received a message on Instagram from a wonderful follower last Tuesday – or was it Wednesday? It’s become a bit of a blur – who told me they couldn’t access my site because Google had put up a warning. So I had a mini breakdown, bought malware removal (SiteDoctor) & protection (SiteLock). They removed the malware & we thought everything was cleared. So my husband & I went to our favorite Birmingham Thai restaurant – he had also had a very bad day – & we spent the evening avoiding everything, he didn’t study & I didn’t touch anything blog related. The next day, before I had even had a chance to do anything I received a message from another person, this time on Hometalk, telling me they couldn’t get to my site. So I went through the process of having the malware removed again, & I made the necessary steps to keep this from happening again, such as changing my password.

I then made sure that SiteLock (the malware protection program I bought at the same time the problem was happening) was set up & why it hadn’t prevented the malware from coming back. I was told that I needed to call Site Doctor. I called. I then had a major meltdown. I ended up on the phone with someone who cared more about hearing himself talk then listing to my problem & what I had been dealing with or what they had told me. Not only that but he told me that the situation could only be resolved in two ways, one that would cost over $200 & the other that would cost $79 a month. The first would be a thorough clean that would fix “the hole” or whatever it was that was allowing the hacker to get in, the second is a new program they have that gives my site special attention to ensure that this problem wouldn’t come back – which he kept highly recommending for my problem. Even after I tried to tell him what my hosting provider had said about the issue he said these were my only two options. I understand that this is your specialty SiteLock, but I’m also no full. You just want to take my money! I then told him that I needed to talk to my husband about this because it was a lot of money, money we don’t have right now. He then told me to call back or have my husband call back if we had any questions. Like my husband had any clue what was going on. This is my blog, not his, do not belittle me!!

So after listening to him talk (A LOT!) & finding out that after already spending $59.99 to buy SiteLock protection to prevent the problem from happening I needed to spend more money because my case was in the 3% of hacking/malware cases, I also had to hear him say that my husband could call him back. Sorry, but the 21st century woman in me can’t help but note he wouldn’t have suggested to my husband if this was his problem to have me call them back. The only reason I mentioned my husband is because in any healthy marriage it is important to discuss big money purchases (outside of surprise presents) with your spouse & anything over $20 is important to discuss.

Anyways, I ended the conversation as fast as I could & then hid under a blanket & cried. If I was to do what he suggested I would be spending $1007 a year on SiteLock, not including taxes… I had a very good cry…

That evening (Friday) we headed to Atlanta for a wedding we had the next morning & it took all the courage I had to keep it together for the next 24 hours. The next day I called my hosting provider & asked them to close down my site so that no one could possibly get infected. They seemed pretty shocked at the whole situation (especially since it was at the point that I was considering shutting down my site for good because it looked like I didn’t have any other options) & long story short they looked into my situation further & officially cleared my website of malware.

I have since removed SiteLock & was refunded my $59.99 & am now working on getting wewatchyourwebsite.com to keep Domestically Blissful safe from hackers & malware.

I have also been working on hardening my WordPress account in a variety of ways, including having a computer generate my passwords – talk about hard to remember – & adding a captcha to comments. So hopefully we won’t ever have to experience these problems again!

So now that we have gotten through that mess I will now get on to this slightly depressing September Traffic & Income Report. Just go easy on me, Google had my site inaccessible for a good portion of the month which has definitely impacted the traffic & income I received this month.

As you can see my views are definitely down from last month & I received over 15,000 less views than my goal. I thought it would be hard to beat last months views simply because September has one less day than August – who knew I would be battling hackers all month? One good thing is that the Average Session Duration on my site has gone up significantly to 1 minute & 14 seconds! 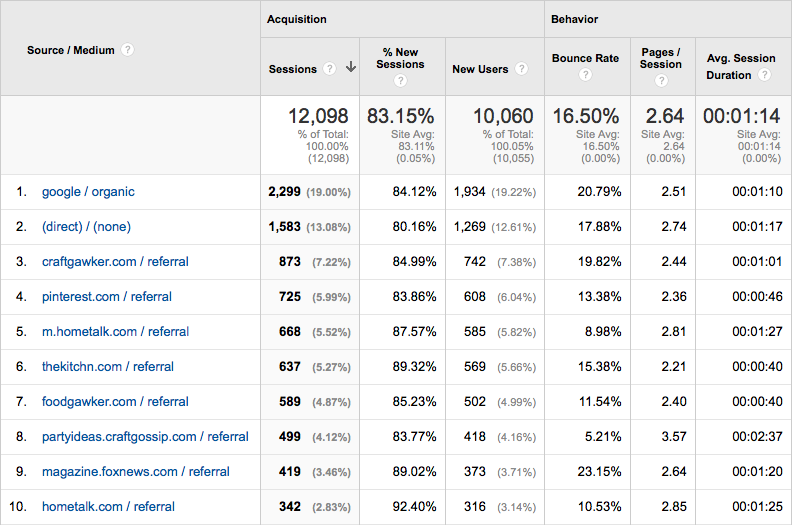 I had a feeling Google would step up at least one notch this month but I wasn’t expecting it to jump to number one. Now that I have been blogging for a whole year the fall posts that I created last year have started getting views again now that we are in that special time of year again! This means that when people search something like Mini Caramel Apples the recipe I created last year will show up in their results. 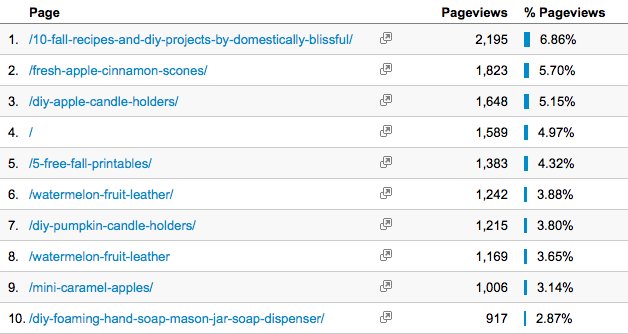 Here are the posts that received the most page views this month – oh & the “/” is the homepage. Number 2 – the Fresh Apple Cinnamon Scones – is a recipe that I shared last year that was featured on Fox News Magazine. You will also see that the Mini Caramel Apples recipe that I mentioned above has also made it on the top 10 list for September.

Although Pinterest is not up to number 1 for referrals to my site yet it has moved up from number 4 to number 3 – as you saw two pictures above. That’s because wonderful people like you have been pinning & repining more from my site! Thanks! Oh & the reason the top one – Fried Spaghetti – has so many impressions is because it was pinned by ModCloth! Thanks ModCloth!

Although my views are down I was able to make a little more money this month because I was accepted into a new advertising program!

Since the new malware protection wasn’t purchased in September it will go on October’s expenses… At least I didn’t spend more than I made. Unfortunately I am not apart of a BlogHer Social Media Influencer program right now, which means I won’t have another $50 to report next month from them. The good news is that I didn’t start Gourmet Ads at the beginning of the month, plus my views were way down, so hopefully next month that will make up for the hole from BlogHer!

Thanks again for your support & prayers! Hopefully October will be a happier month & when we meet again on the first Wednesday of November – the 5th – the report will be a little bit happier!